An experiment in reading

So some time ago I suggested the idea of my doing a reading from Fae - The Wild Hunt via webcam. Not everyone jeered and laughed at the notion, and so here it is. This doesn't really contain any real spoilers, though my delivery clearly needs some practice. If the blogging gods are feeling unkind then you can catch the reading on youtube here

Myth and Lore in Fantasy - The Story Hiding Between the Lines

They  (whoever they are anyway) say that a good author writes about the things they love in novels and damn the consequences. To a lesser or greater degree that's what I did. I love the myths that are buried between the paragraphs in a fantasy novel. Don't explain them or give too many details, that ruins the effect. Leave me wondering. Let me leave the thoughts to ferment at the back of my mind while you tell your story.

Call it the mythology of the story, call it lore, it's all the same thing really. In fantasy, at least for me anyway, it's probably one of the most important part of the story. Personally I like the term "lore" and since this is my post, that's what we're calling it. It would be easy to confuse this with world-building and, to a certain extent it is a part of effective world-building, creating a backdrop against which the novel plays out.

In Peter V. Brett's Demon Cycle it's the myths and legends telling of the time when the demons were first driven back to the core. With Rothfuss it's the tales of the Chandrian and of Lanre, in Raymond E Feist's Riftwar Saga, I suppose it's the legends of the Valheru. What it isn't is the geography or economics, or even the politics of a place. Lore is all about myth and half-remembered fables.

We're funny creatures us readers. Rules are not universally applicable. Whilst we might accept an info-dump in terms of lore, it would never work with a character's past for example. How this lore is conveyed to the reader is a damn tricky thing. There was a time when you could do this by way of a prologue. David Edding's Belgariad did this and, as a reader in my early teens, it didn't bother me at all. Either fantasy as a genre has moved on a little since then, or I've grown older (I said older, not up. Growing up is a foolish thing for any man to attempt, we're simply not qualified.) In any event, a prologue like this seems clumsy and cumbersome now, unless done very well.

Rothfuss conveys a LOT of his lore by way of  songs and stories within his books. I've tried to do the same thing, though most of the lore conveyed turns out to be false.

“The droos began as one such people. A people driven by the quest for understanding, to discover their place in this world and the starry skies above. They had no temples, no churches. They gave no Setday services, unlike our good priest.” He nodded towards the door Trallen had so recently stormed out of. “They spent their time, instead, in the study of all things, and of the secret workings of the world. The unseen flows of power that turn the seasons and lift the tides. Some say they succeeded in finding answers. Some say they discovered dark and terrible things, and this is how they shattered the moon.”


Oddly creating lore, at least for me, is probably the easiest part of writing.  It's when your imagination is let loose on the page and anything can happen. Without lore then, we as readers, would never know that accepting rings from Sauron is probably a bad idea, or that  Valyria is not going to make a top holiday spot any time soon.

Writing about these myths and legends within the story is also a case of less is more. These are the areas where it's okay to leave the reader hanging. My whole series is about myths and the truth that lurks within them. It's about half-forgotten fragments and lost histories. Give me your imagination to play with and together we can go somewhere special.

Fantasy has a foolish stigma that it's books for nerds or children. To this I say pah! (insert stronger words if you like,) Fantasy is by no means an easy thing to read, or to write. There is a reason fantasy novels tend to be longer than books in other genres, A good fantasy book has to create an entire world on top of a good story and engaging characters. Buried in amongst this will be the lore. It's a small thing but done correctly, it's the icing on the cake. Let me know if I did it right.

Of titles and learning to write again.

I hate coming up with titles. I'm not good at it, and it's easy to end up with something corny. Fae - The Wild Hunt more or less named itself. For that matter, so did Fae - The Realm of Twilight. This this third book though, this one is giving me problems.

In a burst of pure genius I thought I'd do a poll and see what you guys (by which I mean the internet in general) thought of the three options I was working with. Maybe I'd get lucky and get a clear sign. It could happen couldn't it? No. It couldn't. As you can see from the results below, not only didn't it happen but they are almost worthless. 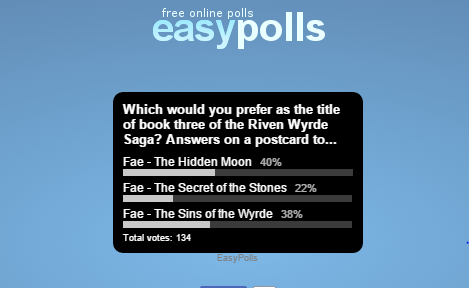 On the face of it, it looks like the first option is every so slightly edging the rest. That said, though it got more votes than either of the others, you could read it that 60% of those that voted didn't want it. About the only thing the poll did tell me was that option two was a non-starter. So basically the poll has been about as much use as a chocolate teapot. On that basis then I'm going to say "the heck with it" and go with option three as the working title.

I started work on book three of The Riven Wyrde Saga a little more than a month ago now and it's been hard going. I had the same problem when I finished book one, I took too long of a break and pretty much forgot how to write. There is nothing particularly hard about writing itself. You sit and type until you hit the length you were looking for and then you'e done. The trouble comes when you want to write something of any quality that people might actually want to read because then you've got to reread and polish and edit.

My method has always been to get the thing written and then go back and try and make it good. The trouble is I've grown to be very critical of myself over the last year. I've had real problems resisting the urge to just delete the whole damn page and start over, but we're getting there.

I have two things that I really struggle with when writing. Okay that's not true, I have several things I struggle with. These range from keeping the caffeine intake at the optimal level to have me bouncy enough to pump the words out, but not so jacked up that I am actually hanging from the ceiling, to keeping the small people (kids, not faeries) alive, happy, not on fire, and killing each other reasonably quietly while I'm trying to write.

By the end of Fae - The Realm of Twilight I was producing about 40'000 word a month. Some writers (mentioning no names *cough* Tim Marquitz *cough*) will brag on social media about banging out over eight thousand words in a day. Me, I can't do that. Four thousand is about my max and that's going to need a LOT of going over.

It usually takes me about twenty minutes of writing to get into a zone where I can produce something good. It has a feel to it. If you're anything like me and you read fantasy as a kid you'll remember that moment when Garion first used sorcery in David Eddings' Belgariad or when the dragon died in Raymond E Feist's Magician, leaving Tomas the valheru's armour. Moments when you step out of the story just long enough to think, "damn, that is cool!" before throwing yourself back in, deeper than before. It's that feeling that I aim for when I'm writing. Once I get close to that then I know I've hit the zone and I'm going to get some good stuff down.

I've hit that a few times now so I think we're getting there and if you check back here or on Facebook in the coming months then you might find a snippet or two, if you're into that kind of self-inflicted torture.