North Wales, it's a lovely place, possibly one of the most beautiful places I've ever been to. Our cottage was nestled on the outskirts of a tiny village looking down towards a bay and miles of sandy beaches. Sheep dotted hills surrounded us, covered in grass so lush it barely looked real. The original plan was to steal an hour a day to write, and hopefully finish this book. Apparently someone out there had other ideas.

The Grand Writing Plan lasted roughly five minutes.  Shortly after our arrival, all of the rain-clouds in the northern hemisphere descended upon our little corner of Wales and set up camp. This had the result of transforming our beautiful view and picturesque village, into a collection of waterlogged fields complete with soggy sheep that looked almost as miserable the children trapped with me inside our rain-lashed prison.

In what was clearly a stroke of genius, the owner of the cottage had equipped it with absolutely nothing for kids to do when it rained. No DVD player, not even an old video recorder. It was also positioned FOUR HUNDRED LIGHT-YEARS from the closest town of any real size, and since the interwebz hadn't yet arrived in the village, there was no way of checking for things we could do. If you're setting out on a four hundred light-year trek to entertain your soggy kids, it's nice to know that there'll be something for them to do at the end of it.

I know we should have researched properly before we left. I understand this. I can't do anything about it now, and any helpful comments I receive about this may result in actual bodily harm.

As an added bonus, the owner proved to be a very strange man indeed who liked to check up on us by peering through the windows, and accosting any visitors we had. The kids named him Mr Snoopy-snoop. I had nothing whatsoever to do with this, and any rumours to the contrary are vicious lies.

By Thursday we'd had enough. We lashed a raft together made from the tattered remnants of our holiday plans, and plotted our escape. We'd make a break for it in the early morning, under cover of darkness, before the rain-clouds could spot us and foil our attempts. I have four kids. We didn't make it out of the place until 11am.

"Get us out of here!" we screamed at the satnav. It had other ideas apparently, and decided to take us on a rambling tour of the smaller, and more terrifying roads passing over the hills and mountains of Snowdonia. After we had to swerve to avoid the third suicidal sheep on the road, I began to think it was a conspiracy.

Suffice it to say, my book isn't finished. I'm sorry about that, blame Mr Snoopy-snoop if you like.
Posted by Unknown at 18:04 2 comments:

So, my author copies just arrived. Boxes once more line the shelves of my spare room to the delight/annoyance (delete as appropriate) of my wife. 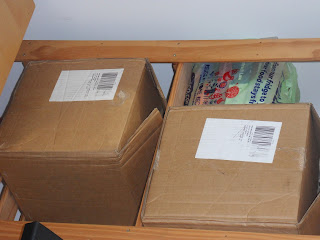 Following along in the general tradition with author copies, I've decided to give some away, but rather than handing them out at random I thought it might be fun to have a competition.

I'll be giving away three signed copies of Fae - The Wild Hunt, or Realm of Twilight, the winner's pick. 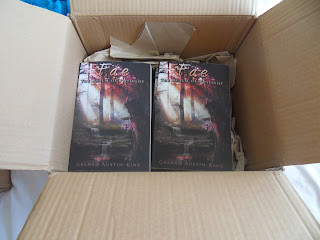 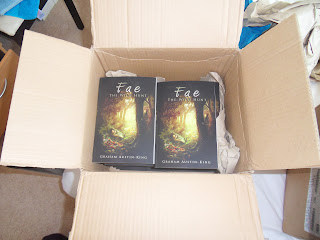 To enter you simply have to send your entry to me here.

Your entry can be anything fae related. Fan-art, photoshopped images, fae-themed photo's, even a piece of writing... So long as it's fae-related, it counts. I'll  post them up here for everyone to see and comment,  then cut it down to the ones I like best, the top three will win a signed copy and the overall winner will receive a special prize that will be announced just as soon as I think one up.