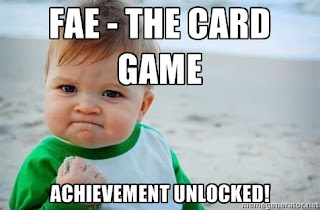 The game is in the early stages of development but is definitely happening. I've been told to expect something that works like a blend of Magic - The Gathering, Stratego, and War (the card game).

There will be much stirring of cauldrons, thaumaturgy and things best left unsaid involving chickens. I'm not involved in the creation itself, I'm not sure what lengths they go to.

I'm told Lords of Karma will work so that you can use a variety of different "platforms" as the base, but come on... who would pick anything other than the fae as the foundation of their deck?

The rough concept is that a player would focus on one "Lord" card, using support cards in an effort to become the Lord of Karma. You could choose from a variety of characters to use as your Lord, so there will be a Klöss card, an Aelthen card, a Selena card... you get the idea.

Realmwalker Gaming, a new division of my publisher, will produce the game which we expect to launch in 2016. There are plans to follow this up with a computer based version too. I don't have many details on that yet, which is just as well as my head might explode.

To say I am excited about this is a colossal understatement. There may have been *squee* noises... It wasn't pretty.

For now, it's back to the fae 3 draft... I'm pretty excited about this book too. In fact I'm more or less unbearable to be around at the moment. My wife rolls her eyes a lot.