Imagine an ice-bound world where the polar caps have expanded as the power of its sun dwindles. A world where life is confined to a 50 mile wide corridor circling the globe, and maintained by the power of the focus moon. This is the world of Red Sister. The world of Abeth, where the ice-wind howls down and hurls shards of ice at those foolish, or unlucky enough, not to have found shelter. 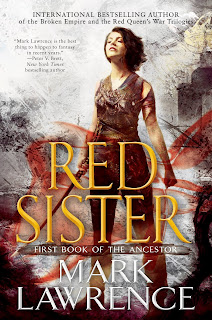 I was lucky enough to receive an Advance Reader Copy of Red Sister, and I have to say, Lawrence does not disappoint. The first book in a new trilogy, Red Sister is a departure from Lawrence's previous novels which take place in the Broken Empire. There is an immediate difference from his previous books, both in tone and content.  Red Sister is far closer in tone to the Red Queen's War than to the Broken Empire trilogy, with none of the hateful protagonist that many found themselves loving despite themselves.

Most of the characters in this book are female, with men playing largely minor roles. Lawrence also has both homosexual and disabled characters, and does a fantastic job of making neither fact matter. All characters are treated purely as people.

Nona Grey is unwanted and broken, given to the child-taker without a price, and consigned to a life of blood and violence as she passes on the Convent of Sweet Mercy. If you were expecting women devoted to a life of meditation and seeking to be closer to god, you will be disappointed.

"It is important, when killing a nun, to bring an army of sufficient size."

Lawrence paints a picture of a world where mankind is just barely clinging on. The worldbuilding is organic and unfolds slowly through the eyes of the characters, through flashbacks and stories, rather than by bombarding the reader.

The magic system is both simple and effective, with magical power passing through the ancient bloodlines of Hunska, Marjal, Gerant, and Quantal, each conferring various abilities. Strong blood strains (primes or pure strains) are a rarity, and strong mixed lines are rarer still.

Nona's story unfolds as she adapts to life in the convent and progresses with her training. She is faced with the challenges of discovering what friendship is supposed to be, and learning the lessons of trust and betrayal, as she studies the business of violence, poison, and blood. But Nona is not without a past, or enemies, and both have their part to play in this tale.

The prose is what we have come to expect of Lawrence. Lyrical and bordering on poetry in many instances. There is a dark beauty to the author's writing which makes it hard to put down and I am already waiting for the sequel.

Red Sister will be released by Harper Voyager in both hardback and ebook format on April 6th and is available for preorder now.